Home » News » Take a virtual tour of Innovative Forms: The Lettering of John Skelton at the Lettering Arts Trust 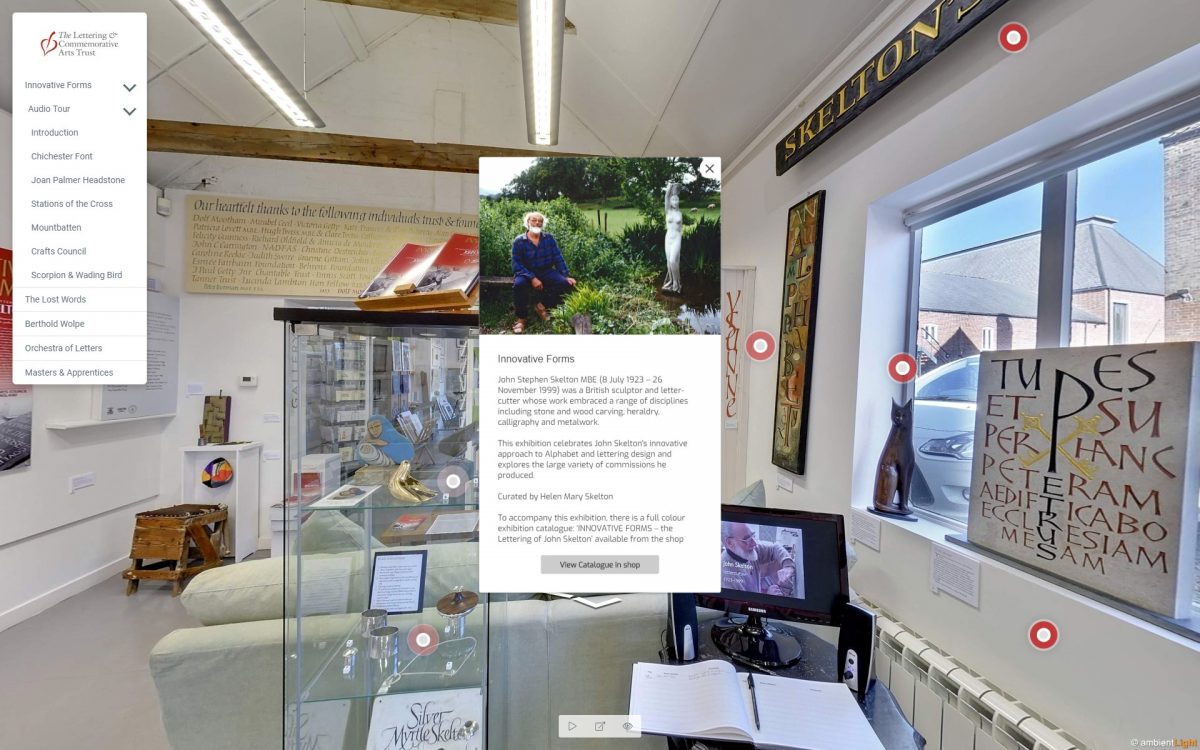 The Lettering Arts Trust is delighted to launch a long-anticipated exhibition: “Innovative Forms: The Lettering of John Skelton”. Curated by John’s daughter Helen Mary Skelton, this intriguing retrospective has been in development for more than seven years. It brings together examples of public and private projects that demonstrate the breadth of John Skelton’s artistic experiments in lettering and how he based his work upon tradition – and then broke away from it.

As with all other institutions and galleries, the Lettering Arts Centre is physically closed, but thanks to a ‘virtual tour’, you can visit the exhibition from the comfort of your home. Go to the Lettering Arts Trust’s webpage at www.letteringartstrust.org.uk and click on the link on the home page.
At your own pace, you can view the exhibits on the walls that feature drawings for commissions such as Sir Winston Churchill’s catafalque that Skelton created for St Paul’s Cathedral or the plaque for Mountbatten. Peruse examples of cartography, heraldry and calligraphy that all exemplify John’s masterful understanding of letterform in different contexts.

Peering into showcases, visitors can study sketches for the iconic font at Chichester Cathedral that broke liturgical furnishing boundaries at the time. There are also examples of silversmithing by John’s wife, Myrtle. 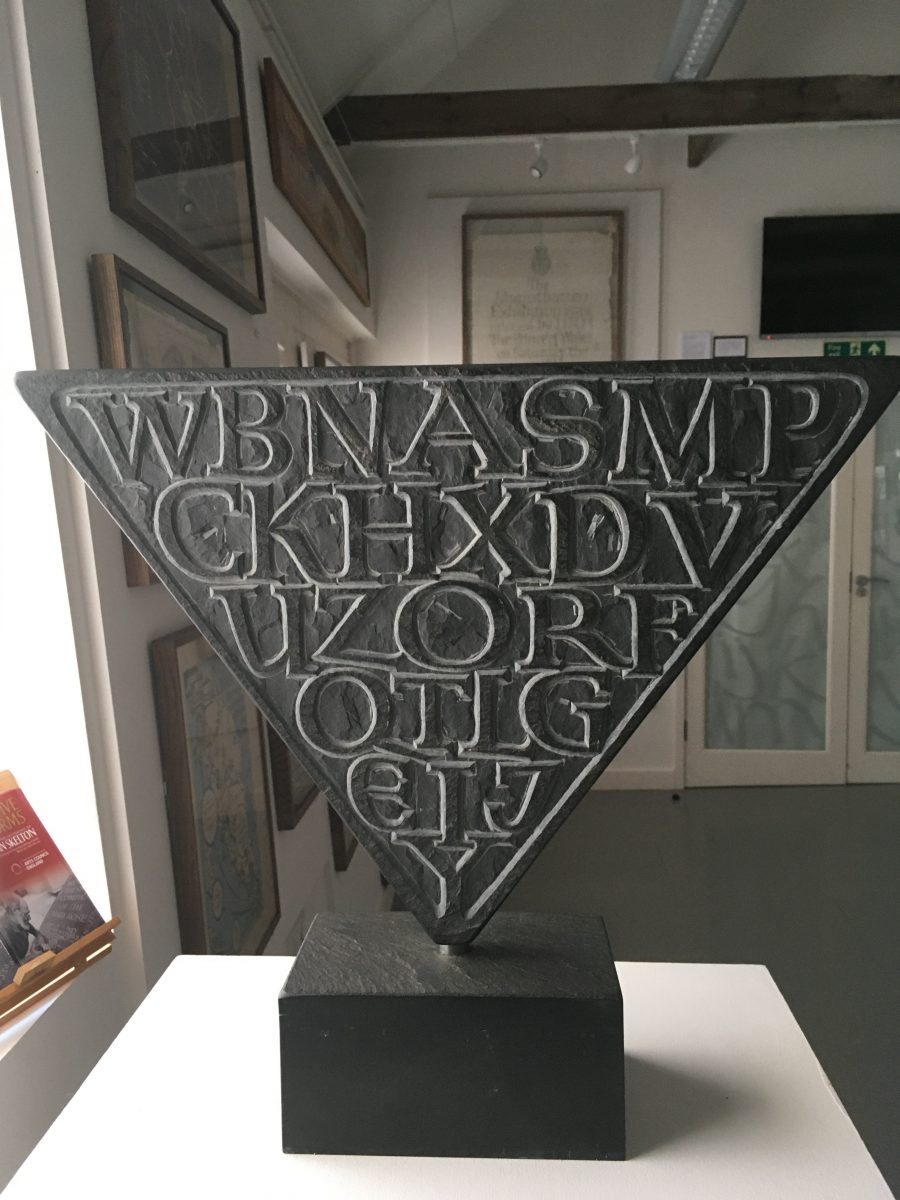 It is only with a formal understanding of lettering that experimentation can be so successfully adventurous. John Skelton was not afraid to test his ideas in metal, wood and stone. His technique in each medium is exceptional: skills honed through trial, error and determination to master. It is easy to imagine John Skelton sitting on his carving stool with a dummy and chisel in hand; wearing a brightly coloured cap to shade his balding head whilst he carved the design for a memorial.

The Lettering Arts Trust is delighted to host this exhibition – which is supported by Arts Council England – and bring one of the foremost lettering artists of his generation to the public’s wider attention. His oeuvre follows in the tradition of fine lettering that traces back to the Roman alphabet and the studies of Eric Gill and Edward Johnston. John Skelton’s influence can be seen in the work of his first daughter and third apprentice Helen Mary, who took on the Skelton studio after his death.  His experimentation encouraged others to break conventions as can now be seen in some of the work of current contemporary lettering artists.

Discussing the challenge of bringing the exhibition to fruition, its curator Helen Mary Skelton remarks: “The exhibition covers work from 1958-98 and shows the extensive archive and the vitality and originality with which John approached lettering and other commissions. We have gathered exhibits from private collections, borrowed pieces from the Crafts Council and raised funding from Arts Council England. It is not surprising that it has taken years to complete this survey, but the result is very worthwhile. Through the exploration of John Skelton’s work it can be seen how he has earned a place as one of the outstanding artists of the second half of the 20th century.” 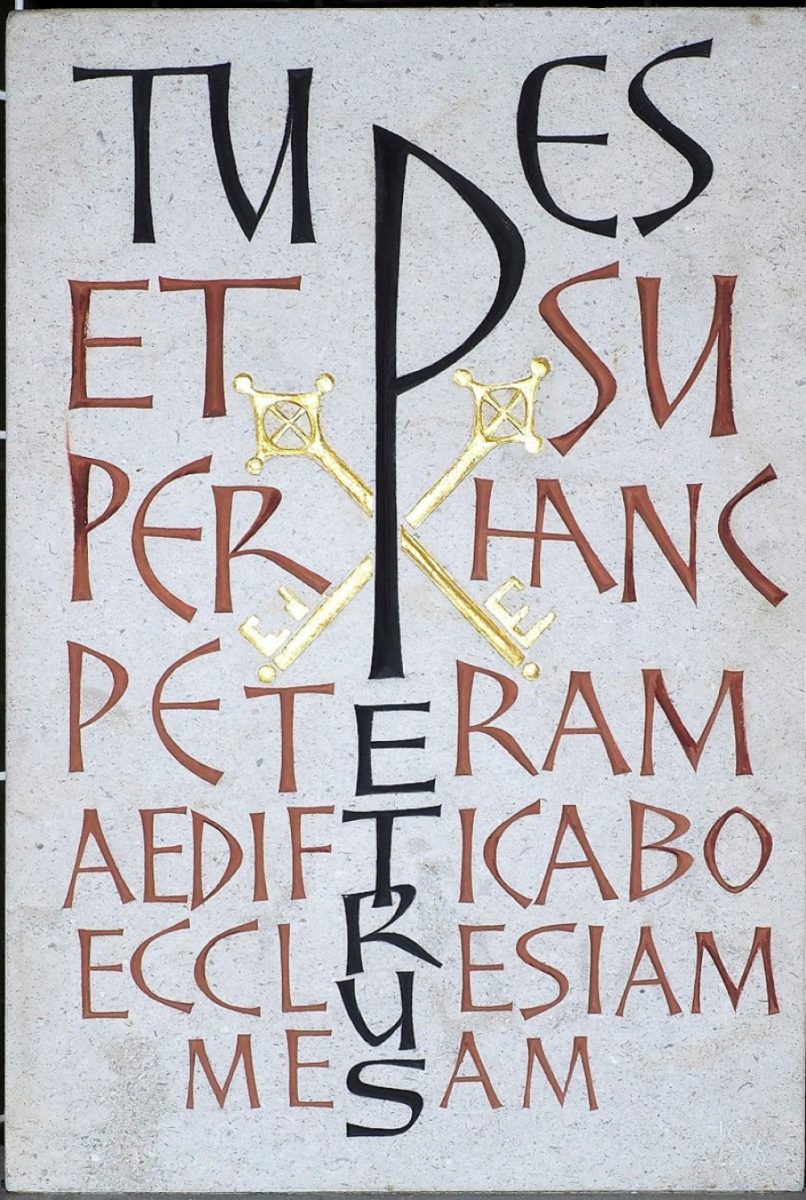 ‘Innovative Forms: The Lettering of John Skelton’ has been extended until the end of August 2020. It is accompanied by a fully illustrated catalogue that provides a comprehensive insight into the artist’s0020work, with essays by Tom Perkins, Ewan Clayton and other lettering luminaries.

A number of artists who have been inspired by the work of John Skelton have created a range of merchandise for the exhibition. These beautiful products include ceramics and screenprinted scarves; silver jewellery; and ornaments. There is a limited edition resin cast of the Ditchling Cat, and an aluminium cast (also limited edition) of John Skelton’s ‘bronze dove’. All are available to purchase online from the Lettering Arts Trust website and shop