The Object of the Year competition 2019 – it’s time for you to cast your vote!

The theme for the objects this year was ‘Volunteer’s Choice’.  We asked volunteers to tell us about their favourite objects and why they are special.

Here are this year’s entries.  Voting is open between 2 – 15 September. 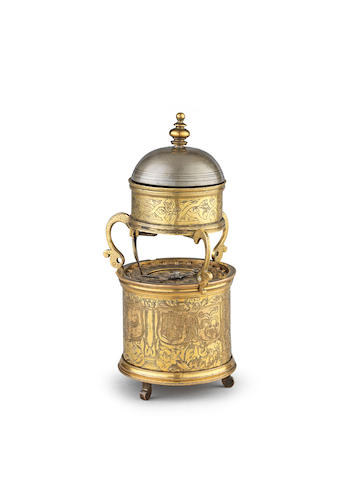 The local authority Museum Service once had a Museum specifically designated to its Clock collection. This collection is internationally regarded, regularly accruing information requests from abroad. In its original location it was unfortunately subject to at least three burglaries from 1964 to its closure in 1989. The original bequest is now housed in its entirety at Moyse’s Hall Museum
The Museum has been fortunate enough to have the chance to repatriate a clock stolen in the first burglary (1964). Serendipitously it could be identified by virtue that it was one of the few pictorially described in the very first 1954 catalogue. Furthermore, its engraved date was corrected by a visiting German academic in the 1950s from its original date of 1580 to an earlier date of 1540, the 4 being a stylised gothic type which led to the later mistake.
This time piece, made in Prague falls into the more generic description of Augsbergs; the German City that led with the fabrication of this style of time piece. Moyse’s Hall now houses one of the largest Augsberg collections in the country. This recent addition is not only the earliest example of this style of clock in the collection, but has actually become the earliest of the entire collection. Some forms of Augsberg are fairly similar, such as the drum shape of this timepiece, however the addition of a detachable drum bell case surmounting the piece makes it far more bespoke. 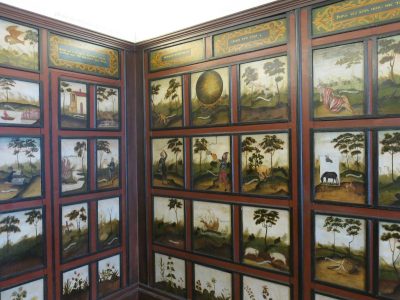 The unique and mysterious Hawstead Panels originally came from Hawstead Place, the home of Sir Robert and Lady Drury, where they adorned the walls of a closet. Lady Drury devised the closet and, with a gifted painter for a brother, is believed to have decorated the panels herself in around 1600.
As well as featuring mottos, emblems and phrases, they depict human figures, animals and plants. Allegories and symbolism like this were used in meditation, but seem surreal to modern eyes.
One of the Latin inscriptions gives an insight into Lady Drury’s life, while her husband was away at Court or on military campaigns: NVNQVAM MINVS SOLA, QVAM CUM SOLA – “never less a lonely lady, than when a lady alone.” This becomes even more poignant when, in 1610, her fourteen year old daughter, Elizabeth fell ill and tragically died, leaving Lady Drury childless.
Many experts have looked at the images and tried to ascertain their significance, but ultimately each viewer will notice something different within the mass of intricate artwork and find their own interpretation. 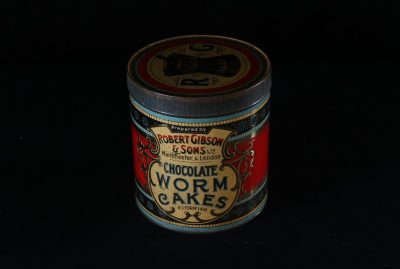 For a tin so elaborate and eye-catching this item is in fact something a lot less glamorous than you may expect!
With an intriguing name and a curious and attractive design, the theatrical label initially suggests it may be a practical joke, something to fool your friends with! Could it really be, as the name on the tin leads you to believe, a cake containing worms as the main ingredient?!
The ‘Chocolate Worm Cakes’ were in fact used to treat tape worm infestations in humans, especially children. Individual cakes would be purchased straight from the tin and therefore it would have to be eye catching on the shelf.
The tin is from circa 1905 and is from a chemist shop in Ipswich called J. Threadkell. The shop ran from 1890- 1972.
It’s strange to have such a striking design on a tin which contains a medicine to treat a rather unpleasant illness. The object evokes a time before the NHS, when health standards were poorer, and where a local pharmacist or general store was heavily relied on to treat ailments, which is less common today.
This object deserves to win because it makes people stop and think – perhaps turning a few noses up to start with.
Though this tin cannot be dated with any precision, it provides a solid link to the local businesses in our area and gives us an insight into people’s lives of the past... warts and all! 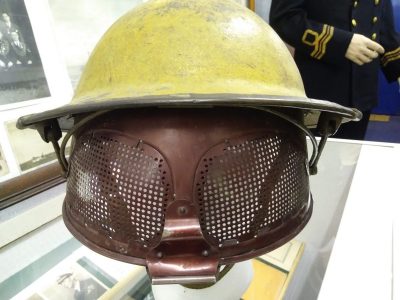 The object chosen is a British WW2 Experimental Cruise Visor steel helmet. Only approx 5000 were made in early WW2, with a view to protecting eyes from shrapnel splinters, many were lost after Dunkirk, and helmets proved not to be popular due to very restricted vision particularly if water was on them as it filled the holes making vision impossible. Many of those not discarded or lost had their visors removed or were simply not used. We are fortunate that our helmet is still original and in working order. These are considered to be very scarce and collectible items. Because of its scarcity it is not a “hands on” item and is kept in a display case to prevent damage to its basic mechanism. 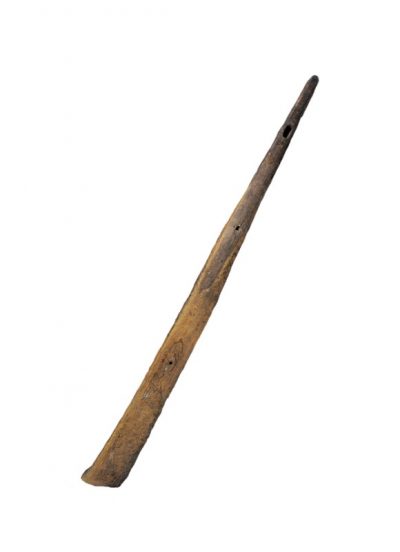 More than a thousand years old, this huge oak side-rudder dates from the time of the Viking invasions of East Anglia in the ninth and early tenth centuries. At 4.3 metres in length, it is the biggest and best preserved in the world.
The rudder was washed ashore during a storm in 1986 and found on the beach at Easton Bavents (just north of Southwold) by a local fisherman, Nobby Hutton. It was conserved at the National Maritime Museum in Greenwich and carbon-dated between 850 and 950 AD.
Such a massive rudder or steering oar must have come from a ship of unusual size, more than 30 metres long. Perhaps this was one of the ocean-going ships that brought Viking raiders to Suffolk, or a high-sided cargo vessel.
This is wonderful object, of national significance. 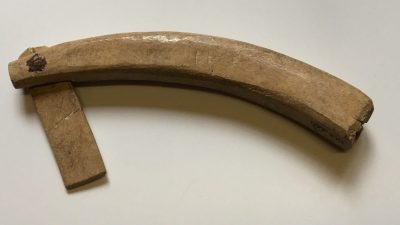 An unassuming object that sits amongst all the objects in the display cases at West Stow is a bone key.
Nothing much to look at, but for me it sums up everything that West Stow stands for. An original artefact found on site that posed questions for those that found it.
It required experimentation to find its purpose in the Saxon world and further work to make locks to fit.
It provokes questions for those that see it now and starts conversations about the reasons for its use.
I have chosen this object because even after such a long passage of time, the humble key is still provoking interest and prompting the public to ask questions. 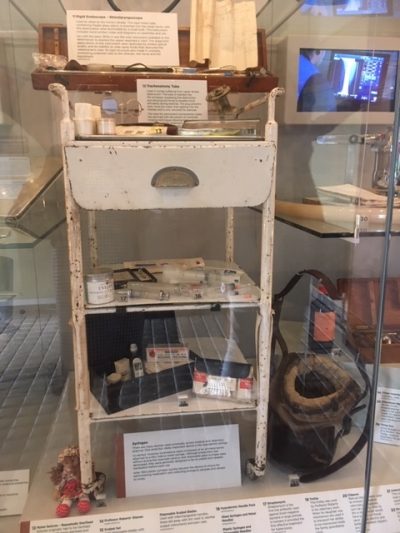 Our object is a surgical trolley used by Prof. Roberts. He was a pioneering equine veterinary surgeon during 1960's and 70's. He was renowned for the surgery on the racehorse Mill Reef and was well known for his innovative use of everyday equipment, such as the legs from his wife's ironing board, for use in his veterinary practice.
His practice was a family affair and involved his wife as anaesthetist. As child minding facilities were limited at the time his daughter would usually have to accompany them on visits to patients.
One of his daughter’s favourite memories was the occasions she had to put her dolls on the trolley if she misbehaved during an operation when Prof. Roberts was working with his wife. She was then not allowed to play with them, but had to sit quietly and watch.
The trolley encapsulates the all-round characteristics of Prof. Roberts. It shows his skill and innovation as a veterinary surgeon and also his care and involvement with his family. Our museum also showcases areas of technical and physical skill and encourages families to participate in all the activities.